History of the Sun City Poms:

The Sun City Poms began in 1979 as a cheerleading group for the Sun City Saints women’s softball team. Since that time, the group has evolved from cheerleading into its current structure: a marching unit and a performing unit. The Sun City Poms are highly energetic performers who demonstrate the organization’s dance standards. Some even do acrobatics!

Members of the Sun City Poms come from all walks of life, and are more than entertainers.  They represent the fulfillment of life at any age.  Performing with the spunk and energy of their youths, these ladies are having the time of their lives while sharing positive aspects of retirement and aging, and shattering conventional images of “senior citizens.”

If you are interested in learning more about the Poms or would like to schedule a Pom performance, check our contact information below. Poms season is from September through May.

The Performing Poms unit entertains at some 50 shows a year. They appear at conventions, sporting events, community meetings, fundraisers, and retirement living centers and care facilities.   With excitement, agility, and grace, these women perform pyramids and pinwheels, while some even do splits, leg lifts, and headstands. Dances include modern jazz, country, and the internationally famous “Pom Routine.”

The Marching Poms unit participates in several parades a year, including the nationally televised Fiesta Bowl Parade in Phoenix. They perform a marching routine repeatedly throughout a parade route ranging from 1.5 miles to 3.0 miles. These gals strut their stuff with rhythm, energy, agility, and showmanship!

Check out these videos of  Sun City Poms!

Watch the Sun City Poms on The Today Show – December 2018

Watch the Marching Poms “live” in this YouTube video from the 2017 Fiesta Bowl Parade!

The Pom marchers had a very successful 2019-2020 season. Their main accomplishments were the Best Marching Unit in the Phoenix Veterans Parade and also First Place in the Wickenburg Gold Rush parade; being invited to participate for the 30th year in the Fiesta Bowl parade in addition to performing in many other non-competitive marching event s.

Poms marchers have full practices from September through May.  Information regarding the Marching Poms can be obtained by calling 602-392-4242.

Special classes are held for newcomers during the summer.

Poms are proud to announce all their sponsors!

THANKS TO OUR SPONSORS FOR MAKING PERFORMING AROUND THE VALLEY POSSIBLE! 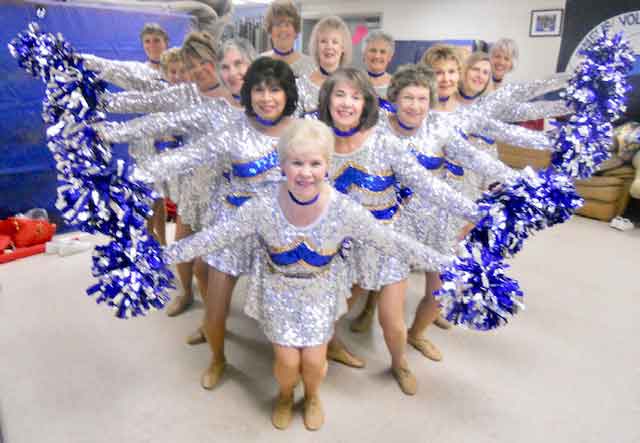